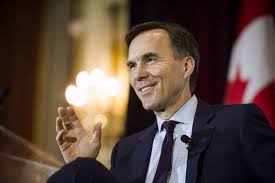 Federal Finance Minister Bill Morneau says he has a “high level of confidence” that the new trade pact negotiated to replace NAFTA –  will be ratified by all three countries involved.

Morneau told an event in New York that it’s clear American lawmakers are in the first stages of negotiations – toward ratifying the new trade agreement – and he takes seriously comments by U.S. President Donald Trump that he plans to give notice of his intentions to withdraw from the previous NAFTA agreement – but Morneau said he didn’t know when that would happen.

That move by the president would give American lawmakers six months to approve the new trade deal – or carry on with no free-trade pact with Canada and Mexico.