There have been four pedestrian deaths on GTA streets in four separate incidents over the past 24 hours. 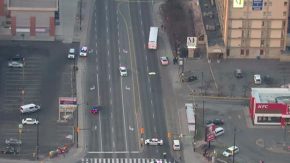 (Police are investigating a collision that left one pedestrian dead in Brampton. Photo credit CP24)

The most recent fatality happened in Brampton Wednesday morning at about 6:30, when a pedestrian was struck by a bus near Queen Street and Kennedy Road.

It was about 7:30 Tuesday evening on Midland Avenue near Lawrence Avenue, when a man, believed to be in his 60s, was pronounced dead after he was struck by an SUV.

Toronto Police Sergeant Orang Momeni was on the scene after the incident and says witness accounts and local store video will help determine if charges should be laid. Roads in the area of Midland and Lawrence have since reopened. It was around the same time Tuesday evening when a woman was pronounced dead after being struck by a vehicle near Erindale Station Road and Dundas Street West in Mississauga. Peel Police say the woman was trying to cross the road when she was hit.

Earlier in the day near Derry and Goreway in Mississauga, a 79 year old woman died after being hit by a truck. Investigators say the woman was walking south on the curb of Minotola Avenue when she was struck by a southbound truck which had just left a job scene.

Research shows that when an older pedestrian is hit, their chance of dying from their injuries is much higher than younger pedestrians.