First it was romaine from central California and concerns of E. Coli.

Now, there is a recall in Canada of a packaged salad due to possible Listeria contamination. 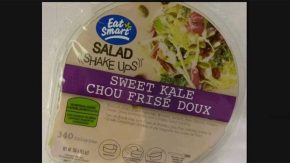 The Canadian Food Inspection Agency says Eat Smart’s “Salad Shake Ups – Sweet Kale” should be thrown out or returned to the store.

Affected are 156-gram packages of the product with the best before date of December 3rd.

The recalled product has been distributed nationally, but there have been no associated illnesses reported.

Symptoms of listeriosis can include vomiting, persistent fever, muscle aches and severe headache.