The Toronto International Film Festival is set to honour the top 10 Canadian feature films of the year, with an event today in Toronto. 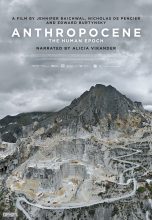 At the top of the list is “Anthropocene; The Human Epoch”.  It speaks to the human impact on planet earth.

The list also includes a film shot in the Haida language and honours three indigenous filmmakers and 11 female filmmakers.

Anthropocene is scheduled to play the Bell TIFF Lightbox in Toronto at 4:15 this afternoon.