FORD PLANS TO ATTEND MEETING AFTER ALL 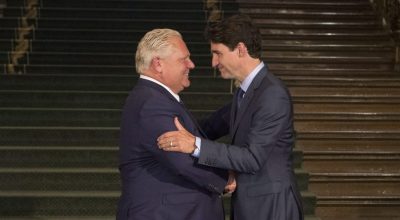 It seems a good face-to-face meeting was all it took to change Doug Ford’s plans for Friday.

After threatening to skip out on the First Ministers meeting tomorrow in Montreal – the Ontario Premier is now reportedly planning to attend – after chatting with Prime Minister Justin Trudeau – who sees the upcoming event as very productive.

The PM sees no reason why he and Ford can’t work together on a number of issues – but the Premier has insisted he also wants to talk about issues such as eliminating the federal carbon tax – and how the two levels of government can stop irregular border-crossers from the U-S.