KHADR LAWYERS TO ARGUE FOR CHANGE IN BAIL CONDITIONS THURSDAY

Lawyers for Omar Khadr are scheduled to appear in an Edmonton court Thursday to seek changes to bail conditions he faces while he appeals war crime convictions by a U.S. military commission. 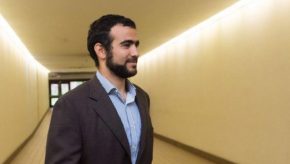 The 32 year old former Guantanamo Bay detainee is seeking a Canadian passport to travel to Saudi Arabia and wants permission to speak to his controversial sister Zaynab Khadr.

Liberal MP Karen McCrimmon is parliamentary secretary to Public Safety Minister Ralph Goodale, and told Zoomer Radio’s Fight Back with Libby Znaimer, whether Khadr is granted his requests will come down to security.

“What are we doing to keep Canadians safe? What are the threats? What are the risks? The court is going to have to listen to all of those issues,” McCrimmon explained.

An application filed by Khadr’s lawyer suggests his appeal in the United States has been overly delayed and he has obeyed all the conditions of his release, and those conditions have caused psychological stress and anxiety.

Khadr spent years in U.S. detention at Guantanamo Bay after he was caught in 2002 at the age of 15, accused of tossing a grenade that killed U.S. soldier Christopher Speer in Afghanistan.

Last year, Khadr was paid $10.5-million by the Canadian government as a settlement for violations to his rights as a Canadian citizen.