95 HOMICIDES YEAR TO DATE IN TORONTO, INCLUDING 2 BY GUNFIRE IN PAST 24 HOURS

There have been at least seven incidents of gunfire in Toronto from Tuesday to Wednesday, two of those resulting in death.

The most recent was just after midnight in the busy King and Spadina area of downtown Toronto. A man was shot and killed. A woman was also shot and is expected to survive. 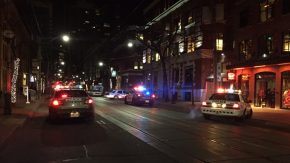 (Police are investigating a double shooting near the Entertainment District that left one male dead. Photo Credit: Michael Nguyen/ CP24)

Toronto Police Inspector Darren Alldrit was on the scene early this morning and said a RIDE spot check was happening around the corner on Spadina south of King at the same time.

“They also heard numerous gunshots and immediately ran to the scene where they located a male and female who had suffered gunshot wounds. Both of these victims were transported to hospital and unfortunately, the male succumbed to his injuries and was pronounced (dead) at hospital. The female, I understand, has non-life threatening injuries. I have no suspect information at this time,” Alldrit explained.

Tuesday morning, Toronto Police say a 28 year old man was shot and killed while sitting in his car in the Jane and Finch area.