TRUMP'S DECISION TO WITHDRAW TROOPS FROM SYRIA SEEN AS PREMATURE

“We have won against ISIS. We’ve beaten them and we’ve beaten them badly. We’ve taken back the land and now it’s time for our troops to come back home,” Trump said in a video posted to Twitter on Wednesday. 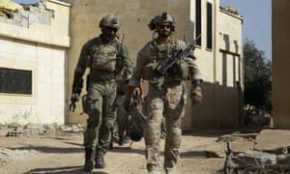 The decision to bring home 2000 U.S. soldiers brings a sudden end to a military campaign that is believed to have reduced the Islamic State’s hold in Syria to about 1 percent of the territory they once controlled.

The decision also plunges the Trump administration’s Middle East strategy into disarray, upsetting allies such as Britain and Israel and forsaking Syria’s ethnic Kurds, who’ve been faithful partners in fighting the Islamic State.

Trump’s decision contradicts what other top national security advisers have advised in recent weeks. Among them, John Bolton said the U.S. would not pull out of Syria as long as Iran was exerting influence there, either through its own troops or Iranian backed militias.