Bombardier is running out of time to deliver six vehicles for the Eglinton Crosstown LRT by February first.

But a company representative says Bombardier remains committed to meeting the updated deadline for vehicle delivery. 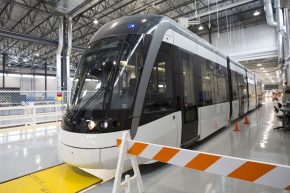 Bombardier showed off an early production model of the light rail vehicle to reporters this past October. At that time, one of the six was to be delivered in November but that delivery was put off to February with the remaining five.

This problem is the latest in a series of issues that have plagued construction of the Eglinton Crosstown, which is currently scheduled to open in 2021, a year later than initially announced.

Lawyers for Metrolinx attempted to terminate the provincial transit agency’s original $700-million contract for 182 vehicles over concerns Bombardier would be unable to deliver the vehicles on time, but a judge denied the attempt.

An agreement was later reached between Metrolinx and Bombardier for a reduced order of 76 vehicles for $392-million by June 2021. The rest of the Eglinton Crosstown vehicles will be built by Alstom.