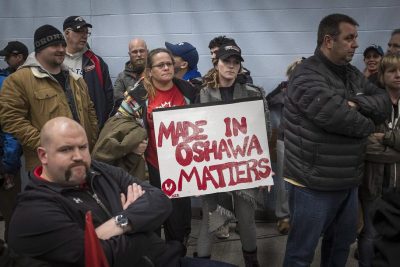 General Motors has given a thumbs down to various proposals by Unifor – to keep the Oshawa Assembly Plant open past 2019.

The company met with Unifor president Jerry Dias today on the future of the plant – and says the options suggested by the union would mean substantial incremental cost increases – and hurt the company’s competitive position.

The union had proposed several options to extend production at the plant – including extending the life of vehicles currently produced there – and shifting production planned for Mexico to Oshawa.

GM says it has instead asked Unifor to work with the company on transition support – for the close to 3,000 Oshawa assembly workers who will lose their jobs when the plant shuts.

Dias says the company’s rejection means GM has “picked a fight with all of Canada.”