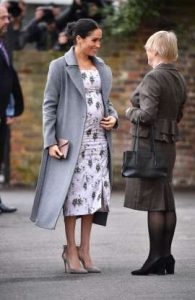 Meghan, the Duchess of Sussex, is taking an increasingly visible role in the British royal family – as she becomes the patron of four organizations – including the prestigious National Theatre.

Kensington Palace says Meghan will take over two roles as patron that have for decades been held by the Queen – in addition to two other roles.

Meghan will also be patron of the Association of Commonwealth Universities and two charities: Smart Works, which helps vulnerable women find the skills needed to work – and Mayhew, a grassroots organization active in London and internationally.

Meghan and her husband Prince Harry are also expecting their first child this spring.