Legendary Broadway performer Carol Channing has died at the age of 97. 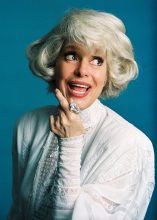 Her longtime publicist Harlan Boll says she died of natural causes at her home in California, referring to her as an industry pioneer, legend and icon.

Channing’s razor-sharp wit, gravelly voice and big, bright smile became the trademarks of a performer who originated some of Broadway’s most iconic roles throughout the 1940s, 50s and 60s.

Arguably her most famous role was as the star of Hello Dolly. And Carol Channing famously beat out Barbra Streisand, who starred in Funny Girl, for the Tony Award for Best Actress in a Musical for her starring turn, even though Streisand was later cast as Dolly in the film adaption.

Channing reprised the role three times on Broadway and in the West End for more than 5000 performances in the title role until her last run in 1995 at the Lunt-Fontanne.

Carol Channing continued to perform into her late 90s. She was days away from her 98th birthday.