Ontario’s Premier is defending his decision to endorse Toronto Police Superintendent Ron Taverner to the post of OPP Commissioner.

In fact, Doug Ford is defiant in saying he has the unilateral power to pick whomever he wants at the province’s next police commissioner because it’s a political appointment.

Ford is also calling out OPP Deputy Commissioner Brad Blair for questioning Ford’s integrity over the appointment and taking the issue to court.

“It’s unfortunate that one person has sour grapes and reacting the way he’s been reacting and breaking the police act numerous times. Someone needs to hold him accountable, I can assure you of that,” Ford went on to say. 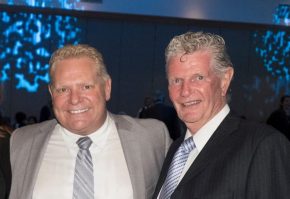 The premier’s statement is a change of stance, as he faces a backlash over the decision to put in place a family friend as the head of Canada’s second largest police force.

Until now, the governing Progressive Conservatives have defended the hire of Ron Taverner by insisting than an independent arms length panel, and not the premier, chose Taverner to lead the OPP.

An Ontario judge ruled Monday there is no basis for an urgent hearing on a request to force the ombudsman to investigate the appointment of Ron Taverner as OPP commissioner.

Deputy commissioner Blair went to court after the ombudsman refused his request to investigate the hiring of the friend of Premier Doug Ford.