A German opera singer, who varied career spanned the second half of the last century has died. 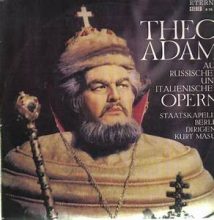 Theo Adam made a strong impression internationally with his Wagnerian roles.

The director of Vienna’s State Opera, where Adam sang many times, called him one of the most important interpreters of the 20th century.

Adam, was bass-baritone who made his debut at the Metropolitan Opera in New York in 1969.