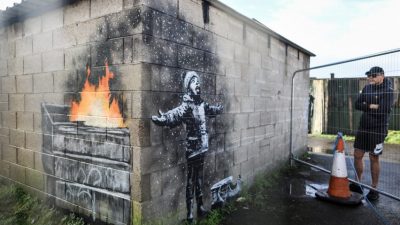 A U.K. art dealer says he’s bought a mural that was stenciled by mysterious street artist Banksy on a garage wall in Wales – for more than $129,000.

The image in Port Talbot shows a child playing in falling ash from a dumpster fire – which is an apparent reference to the air pollution in the steel town.

Security guards were hired to protect the work – after it appeared in December on a steelworker’s garage.

Art dealer John Brandler of Brandler Galleries in eastern England said Friday – he has agreed that the mural will stay in place – for at least two years.

Brandler says he wants to make Port Talbot “a go-to place” rather than a “go-from place” – and he’s thinking of bringing five or six more Banksys to Port Talbot.