U.S. CASE AGAINST MENG WANZHOU AND HUAWEI CONTINUES IN VANCOUVER

The case of a senior Huawei Technologies executive is scheduled to return to court in Vancouver Tuesday. 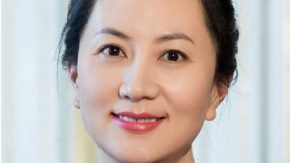 Lawyers with the U.S. Department of Justice laid out their case Monday against Meng Wanzhou and Huawei.

The indictment, based on 23 grand jury allegations, accuses Huawei and Mung of misrepresenting their ownership of a Hong Kong-based subsidiary between 2007 and 2017 in an effort to circumvent U.S. sanctions against Iran.

Meng, who is the company’s chief financial officer and daughter of its founder, is charged with bank fraud, wire fraud and two counts of conspiracy to commit both.

She is free on bail in Vancouver after her arrest December 1st at the request of U.S. authorities, who are said to have already filed a formal request for Meng’s extradition.

The Chinese telecom giant is calling on Washington to stop what it describes as the unreasonable crackdown on the company, while Chinese government officials continue to demand Washington withdraw its request for Meng’s extradition from Canada.