A book about a young Jewish girl who was sheltered by the author’s grandparents in Holland during World War Two has won the UK’s Costa Book of the Year award. 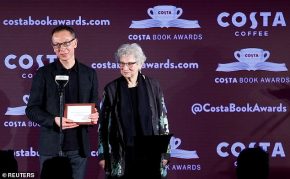 The “Cut Out Girl” by Oxford University professor Bart Van Es was named winner of the $50,000 dollar prize.

The book traces the story of the Dutch girl who was taken in at the age of nine by Van Es’s grandparents before her own parents were sent to Auschwitz.

That girl was Lien de Jong who is now in her mid-80s and attended the awards ceremony in London.

The awards were launched in 1971 as the Whitbread Literary Awards, they became the Whitbread Book Awards in 1985, with Costa taking over in 2006.