The meltdown of snow from last week’s winter storm continues Tuesday morning, with the temperature well above zero to start. The temperature will fall to -3 celcius by Tuesday afternoon.

A flood warning has been issued for rivers and streams by Toronto and Region Conservation Authority. 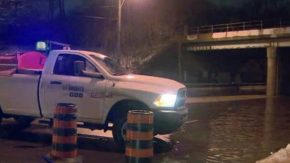 In fact, flooding in the low lying Don Valley earlier forced the closure of the Don Valley Parkway at the bottom end, as well as Bayview between Moore and River. But all lanes have since reopened on the DVP and Bayview.

“We’ve had all of this snow, it’s melting, in combination with the little bit of rain that’s falling. Everything in the rivers, the ice is breaking up from that deep freeze we had. It’s kind of messy, yuck situation out there. Our team of flood duty officers are monitoring these situation and have been ready for it since the weekend,” said TRCA flood risk management engineer Rebecca Elliot on Monday evening.

We’re advised to exercise extreme caution around all bodies of water and avoid driving on flooded roadways or in low lying areas and underpasses.