YES. IT IS A REAL VAN GOGH

Amsterdam’s Van Gogh Museum confirms that the painting, “Still Life with Fruit and Chestnuts,” which dates to 1886, is the real deal. 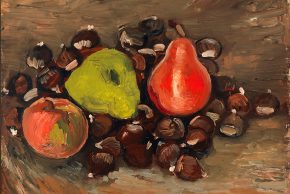 The painting was donated to San Francisco’s Fine Arts Museum in 1886 and was suspected at the time to be the work of the Dutch master.  But several experts had previously said that the painting was not a real Van Gogh and it was excluded from previous official catalogues of works by the painter, who died in 1890.

In a further discovery, the experts in Amsterdam found that there was a portrait of a woman hidden underneath the still life.  Van Gogh is known to have reused his canvases because he worked in poverty for much of his life and only managed to sell a few paintings during his lifetime.