TORONTO COULD HAVE NEW YORK CITY'S CLIMATE BY 2080: UNIVERSITY OF MARYLAND STUDY

If we Canadians want to get a sense of what the climate where we live will be like in a few decades, we should apparently look about 1000 kilometres to the south.

University of Maryland researchers used 27 climate models to determine what the climate is likely to be by 2080.

If nothing changes, researchers say that Montreal could have the climate of Pennsylvania and Calgary could be like a community in North Dakota. 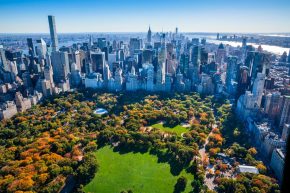 Toronto could feel like the New York City area while Vancouver and Victoria would be like Seattle.

The scientists do qualify, that their comparisons are simplistic and don’t take into account extreme weather events.

They also say that reducing greenhouse gas emissions would effect the comparisons.

Co-author Matt Fitzpatrick says if nothing else, the findings will show people the magnitude of coming changes.

He says by the time he has grandchildren the current climate where he lives won’t be recognizable.