Archaeologists in Italy have announced their latest find; a fresco in Pompeii of Narcissus, who loved only himself. 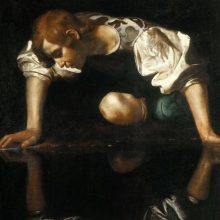 Pompeii was an ancient Roman city that was buried under volcanic ash when Mount Vesuvius erupted in 79 AD. The fatal eruption froze the city and its residents in time, making it a treasure trove for archaeologists.

In Greek mythology, Narcissus was a hunter.  He was said to be impossibly handsome, but did not pursue any love interest presented to him and left behind a trail of devastated suitors.

“Narcissism,” or love of self, was first popularized as a psychological term by Sigmund Freud in the 20th Century.

The find was announced on Valentines Day.