The departure of Gerald Butts as Justin Trudeau’s principal secretary comes as MPs return to Parliament Hill on Tuesday when they are expected to grill the Prime Minister about the SNC Lavalin corruption case.

Before MPs left for the week, Jody Wilson-Raybould was veterans affairs minister and Gerald Butts was Trudeau’s top adviser. 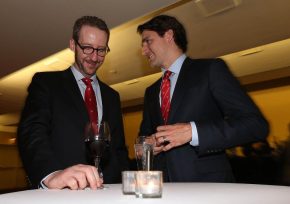 In a statement, Butts stated he categorically denies the accusation that he or anyone else in the Prime Minister’s office pressured former attorney general Jody Wilson-Raybould to ease up on punishment for the Montreal engineering giant. He goes on to say that “the accusation exists, and it should not take one moment away from the vital work the Prime Minister and his office is doing for all Canadians.”

Wilson-Raybould’s resignation came hours after Trudeau said her continued presence in cabinet showed she was not unhappy with his government.

Conservative Leader Andrew Scheer says Butts’ departure is proof there is more to the SNC file than Trudeau is admitting.

NDP Leader Jagmeet Singh is calling for a public inquiry to look into the allegations. He made the call on Monday, just ahead of Butts’ resignation.

“Gerald Butts served this government – and our country – with integrity, sage advice and devotion. I want to thank him for his service and continued friendship.”

Members of the House of Commons’ justice committee are scheduled to hold a closed-door meeting Tuesday afternoon to discuss how they will handle their investigation of the issue.

Opposition members want to call at least nine witnesses, including Butts, along with other top Trudeau aides and Wilson-Raybould herself.

But Liberals on the panel have so far used their majority to keep the witness list to three.