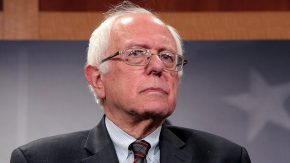 The Vermont Senator announced Tuesday morning he will take a second run for the Democratic nomination after losing to Hillary Clinton in 2016.

77 year old Sanders enters the 2020 race as one of the front runners, a much different scenario for the self-described democratic socialist, who three years ago was viewed as a protest candidate from the political fringe.

Today, Sanders is one of the most popular politicians among Democratic voters and his policy agenda; a suite of progressive proposals to expand health care, broaden the social safety net and make higher education free, has been embraced by many of the Democratic party’s leading figures. He also has a strong following here in Canada and spoke at a sold out event at the University of Toronto in the fall of 2017.

In his Tuesday morning email and video announcing his run, Sanders, who described Trump as “a pathological liar, a fraud, a racist, a sexist, a xenophobe and someone who is undermining American democracy as he leads us in an authoritarian direction,” also set out loftier goals.

“Our campaign,” he said, “is about transforming our country and creating a government based on the principles of economic, social, racial and environmental justice.”
And in a message to rich and “powerful special interests,” Sanders warned, “They may have the money and the power. We have the people.”