Thursday we reported the death of Monkee’s bass player Peter Tork at the age of 77. 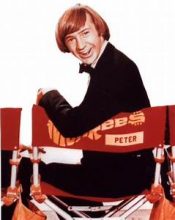 After the report, sales of Monkee’s songs grew by more than 1,100% with “Daydream Believer” leading the way. That song featured Tork and Davy Jones playing the intro.

Billboard reports the band sold a negligible amount the day before Tork’s death was announced but combined sales of albums and digital songs topped 3,000 the day after.