CREATOR OF "THE LOVE BOAT" DIES AT 96

First she wrote the book and then turned it onto one of the most beloved TV series of the 1970s and 80s. 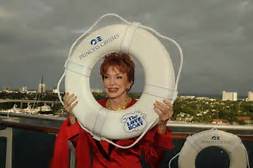 Jeraldine Saunders died yesterday at her home in Glendale, California from surgical complications.

Saunders wrote the 1974 novel the “The Love Boats,” which was used as the basis for the TV series. The book documented her experiences as the first female cruise director for a major cruise ship line.

Jeraldine Saunders left no immediate family. She was 96.