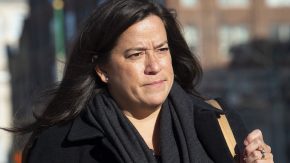 She says it was all aimed at getting her to stop a criminal prosecution of Montreal engineering giant S-N-C-Lavalin.

And she says she believes she was shuffled out of the prestigious justice portfolio to veterans affairs in January because she refused to give in.

Wilson-Raybould made the stunning and detailed accusations in testimony on Wednesday afternoon before the House of Commons justice committee.

Her lengthy appearance broke three weeks of silence on the affair that has rocked the government, prompting her resignation from cabinet and the departure of Trudeau’s most trusted adviser.

Wilson-Raybould told the committee she was ”hounded” to end the prosecution for months after the director of public prosecutions, Kathleen Roussel, had rejected the idea of negotiating a remediation agreement with S-N-C-Lavalin.

She says it continued long after she had unequivocally declared that she would not direct Roussel to reverse her decision.

But she admitted she didn’t consider resigning at the time and didn’t directly raise her concerns with Trudeau after September 17th, when she first informed him she believed it would be inappropriate for her to intervene in the S-N-C-Lavalin matter.

Wilson-Raybould says the pressure campaign culminated on December 19th with what she deemed were three “veiled threats” that she could lose her job from the clerk of the Privy Council, Michael Wernick, who last week told the committee he believes there was no improper pressure applied to Wilson-Raybould.