ANGEL EMERGES FOR "THE BOOKER"

An angel has emerged to save the highest literary award in Great Britain. 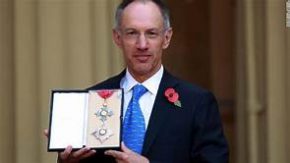 Venture capitalist Sir Michael Moritz will sponsor The Booker Prize for the next five years.

Welsh-born Sir Michael, who is based in San Francisco, is worth $3.4 billion.

The prize won’t bear his name.  It will be known as “The Booker Prize” after 18 years as “The Man Booker Prize.”  That changed after the previous sponsor, the Man Group, withdrew.