CO-INVENTOR OF THE CALCULATOR PASSES

The man who inadvertently became a hero to millions of high school students back in the 60’s, when he helped invent the hand held electronic calculator, has died. 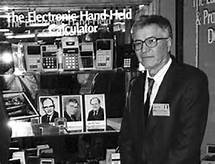 Jerry Merryman said it was late in 1965 and his boss at Texas Instruments called some people into his office, said we’d like to have some sort of computing device to perhaps replace the slide rule and it would be great if it were as small as a little book.

Merryman designed the printed circuits in the device and said he thought they were making a calculator when in fact, they were creating an electronic revolution.

Merryman retired from Texas Instruments in 1994.