A legendary Inuk singer, whose music spanned the cultural gap between Inuit legends and modern Christmas carols, has died at the age of 72. 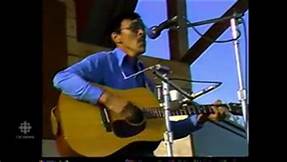 The guitarist and songwriter began performing in the language of his people in the early 1970a.

He was born on the land and learned to play guitar on an instrument his father made from a tin can.

Panigoniak, died yesterday at his home in Rankin Inlet, Nunavut.

He had been suffering from Parkinson’s disease and dementia.