RON TAVERNER WITHDRAWS HIS NAME FOR OPP COMMISSIONER BECAUSE OF CONTROVERSY

The search is back on for the next commissioner of the Ontario Provincial Police. 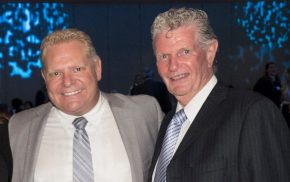 In a surprise announcement Wednesday evening, Ron Taverner revealed in a statement that he is withdrawing from consideration to be the province’s next OPP Commissioner, given the controversy surrounding his appointment by Premier and long time friend Doug Ford late last year.

The 72 year old Toronto police superintendent says he won’t take on the role in order to protect the integrity of frontline officers.

Taverner’s appointment set off accusations of political interference in the hiring process and is under investigation by the integrity commissioner.

Premier Ford has released a statement, thanking Taverner for putting his name forward and saying his 50 years of policing experience and support for the front lines would have been a tremendous asset to the OPP and people of Ontario.

Ford also lashed out at opposition parties who have been pressuring him for months to dump Taverner and re-start the hiring process.

Toronto Police Chief Mark Saunders has released a statement. saying Ron Taverner will continue to be the unit commander of Toronto’s northwest district and in making this personal decision continues to have the support of the Toronto Police Service.

Meantime, NDP Deputy Leader Sara Singh praised Taverner for making what she calls the right decision, but says a public inquiry is still needed to understand how Taverner was able to be appointed in the first place.

Taverner has been in limbo since requesting in December that his appointment be put on hold until the ethics investigation is completed.