“This has been a tough few weeks. Canadians expect and deserve to have faith in their institutions and the people who act within them,” Prime Minister Justin Trudeau offered a conciliatory tone this morning in addressing what he says was an “erosion of trust” over the SNC Lavalin case. 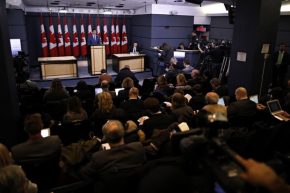 But when asked if he’s apologizing for what happened, Trudeau said awkwardly, “Um, I will be making an Inuit apology this afternoon, but in regards to standing up for jobs and defending our integrity of the rule of law, I continue to say that there was no inappropriate pressure.”

Trudeau did reiterate that he wishes then-attorney general Jody Wilson-Raybould had come to him if she had been feeling inappropriate pressure from staff in his office to back off on the criminal trial against SNC Lavalin.

Trudeau was also asked if he regrets not leaving Wilson Raybould as the justice minister, rather than shuffling her out of the role.

“As we look back over the past weeks, there are many lessons to be learned, and many things that we would like to have done differently and that is certainly part of the reflection we need to have going forward.”

And Trudeau also invoked the memory of his late father in expressing the importance of the justice file, recalling that Pierre Elliot Trudeau was justice minister before he was prime minister.