Toronto’s mayor is lauding city councillors not just for passing what he calls a “responsible budget”, but for making progress on the real challenges. 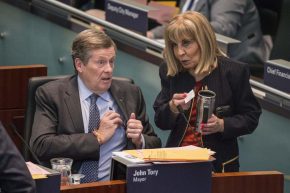 “I take this as personal challenge that I’ve been working very hard on, is to make sure we continue to build those partnerships with the other governments on on transit, on housing, on supportive housing, on TCHC, on mental health, on community safety…but I think the part that we don’t acknowledge often enough is we’ve actually made a lot of progress on that,” Tory told council.

John Tory made the comments late Thursday afternoon, after city councillors voted in favour of the $13.3 billion dollar operating budget, along with a ten year capital budget plan of $40-billion.

Josh Matlow was one of the holdouts, because as he says, they’re not getting enough of the job done for residents.

“Better snow clearing in our city, we want the TTC funded well, just basic services that people are asking for and understandably they call us everyday and say the city’s not getting the job done,” Matlow explained.

A property tax hike of just over 2.55 percent is in addition to the annual levy for the mayor’s previously approved city building funds, which means homeowners actually face a tax increase above inflation. Add to this a 3-percent water rate increase and an increase of just over 2-percent on garbage collection rates.