Alex Trebek was back to work on Tuesday! 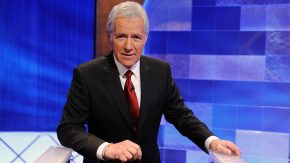 Less than a week after sharing news of his stage 4 pancreatic cancer diagnosis, the Canadian-born Jeopardy! game show host was back on the set Tuesday just as he’d planned.

People in the TV industry and Jeopardy fans have rallied around Alex Trebek since he revealed that he plans to fight his disease, despite the low survival rate statistics.

Alex also quipped last week, that he has to beat it because under the terms of his contract he has to host Jeopardy for three more years.

The TV industry and fans around the world have rallied around 78 year old Alex Trebek. The Twitter and Facebook accounts for Jeopardy! posted a thank you message last Friday.

“The outpouring of good wishes and support in response to Alex’s recent health news has been humbling and overwhelming,” the show wrote. “Please note that your messages are being conveyed to him and are deeply appreciated. From everyone at Jeopardy! — thank you.”