Corey Hart delivered an emotional speech dedicated in part to his late mom, as he was inducted into the Canadian Music Hall of Fame at the Junos Sunday night in London, Ontario.

“My mom was my best friend and she taught me to never surrender. When I was a little kid, she inspired and instilled in me hopefully the light that I’m trying to share and instill in my children,” Hart explained, as he paused to control his emotions. 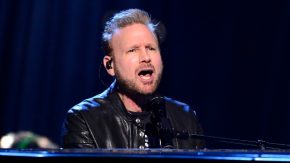 The crowd later went wild when the 56 year old singer-songwriter performed his hits Never Surrender and Sunglasses at Night.

The night was also notable for the four major wins scored by Shawn Mendes, who delighted fans with a special performance from his current tour in Europe.

Sunday night’s Junos also included a surprise appearance by Sting, who is performing these days in The Last Ship at Toronto’s Princess of Wales Theatre.