The federal Liberals are signalling they plan to spend their way through the October election, unveiling a budget today that contains a 20-billion-dollar windfall over five years.

The government’s fiscal blueprint spells out plans to spend it all. 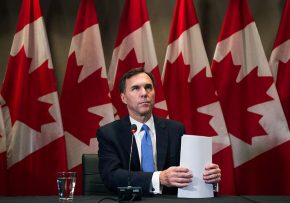 Among its measures, the budget takes first steps toward a national pharmacare plan by creating a new Canadian Drug Agency aimed at reducing the cost of drugs.

It also proposes help for first time homebuyers and for skills training and education.

And there’s money for seniors, cities and Indigenous Peoples — most of it promised for after the fall election

$1.7 billion over five years, and $586 million a year after that, for a Canada Training Benefit to help workers upgrade skills and acquire new ones while keeping their jobs. The benefit includes a $250-a-year tax credit to pay for training programs and access to employment insurance to cover living expenses for up to four weeks away from work.

Measures to make housing more affordable, especially for first-time buyers, by letting them borrow $35,000 from RRSPs (up from $25,000) and having the Canada Mortgage and Housing Corp. contribute a small share of equity for down payments.

A federal deficit of $19.8 billion, including a $3-billion “risk adjustment,” an increase of $200 million from last year’s forecast. The Liberals’ forecast again includes a gradual reduction in the deficit, but not quite as quickly as anticipated last year. By 2023-2024, the projected federal deficit is $11.4 billion.

$3.9 billion for farmers in supply-managed industries affected by new trade agreements with Europe and a bloc of Pacific Rim countries.

$2.2 billion for municipalities’ and First Nations’ infrastructure projects, through a one-time boost to the amount distributed through the federal gas-tax transfer.

$1.2 billion over three years to enhance social services for Indigenous families and children, the main element in a package of spending aimed at Indigenous Peoples.

Lowering the interest rate on Canada Student Loans to the prime rate, from the current prime-plus-2.5-percentage-points.

Creating a new Canadian Drug Agency to centralize the evaluations of the effectiveness and efficiency of new drugs and buy in bulk nationwide, instead of province-by-province.

$500 million a year, starting in 2022, to subsidize the costs of drugs for rare diseases, whose high costs are distributed among very few patients.

$950 million for municipal governments to refit their own buildings for energy efficiency and to provide their own subsidy programs for private homeowners to do the same.