It may be prompted by spring fever, but it is extremely dangerous and OPP Sergeant Kerry Schmidt says, “it has to stop!” 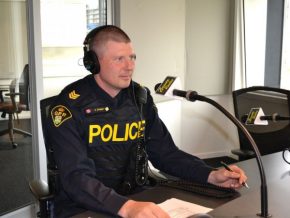 (Sgt. Schmidt seen here during one of many appearances on Zoomer Radio’s Fight Back with Libby Znaimer)

Sgt. Schmidt says two drivers have had their vehicles impounded after being clocked well in excess of driving at 200 kilometres an hour.

“Unfortunately, we see far too many people taking far too many chances, on side roads like this, industrial roads, commercial roads or on the highways going way to fast,” Schmidt says on his Twitter feed while on the side of the road on Mississauga Road.

The incident came hours after another driver was pulled over on the 401 in Whitby after being clocked at 227 kilometres an hour.