Opposition members on the Federal Commons Ethics committee will be pushing this week to bring renewed attention to the SNC Lavalin affair. 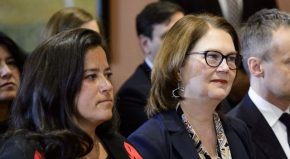 Members are scheduled to meet Tuesday to discuss requests from the Conservatives and New Democrats to study the SNC Lavalin controversy, which prompted the cabinet resignations of Jody Wilson-Raybould and Jane Philpott, and left Prime Minister Justin Trudeau facing tough questions.

The Conservatives on the committee want to invite both Wilson-Raybould and Philpott to testify before April 5th and allow the committee to table its findings in Parliament.

Wilson-Raybould made it known on Friday she intends to make a written submission to the Commons Justice committee to provide more information on her allegations that she was improperly pressured to prevent the criminal prosecution of SNC Lavalin.

Conservative Lisa Raitt says what’s unclear is what can be done with this information.

“There’s no justice committee to test her on the evidence because they decided they had heard enough, even though they were told that Jody Wilson-Raybould wanted to come back and say some more. So now we have a very unique situation where the evidence is going to come in and no ability to test it and no ability to have a conversation about it,” lamented Raitt on CTV’s Question Period

Whether anything at all relating to the SNC Lavalin affair will be scrutinized at the Ethics committee could be decided this week. But this is unlikely, since the Liberals also hold a majority on that committee as they do on the justice committee.