This coming Monday April 1st is the day the first privately owned cannabis stores are allowed to open in Ontario. 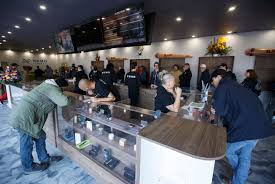 But some of the 25, which have been approved for opening, will not be ready.

Finance Minister Vic Fedeli is acknowledging the licensing process through the Alcohol and Gaming Commission of Ontario, and a continuing national marijuana shortage, could keep some pot shops closed beyond Monday. Fedeli does say he expects all 25 to open “in a timely manner.”

The decision to issue licenses for 25 stores was made by the Ford Tories last August.

“Had this government consulted more effectively with communities, made sure those businesses were going to be ready for the April 1st deadline, we wouldn’t see this botched plan moving forward,” Singh explained.

One location certain to be delayed is Tokyo Smoke, which will be located in HMV’s former flagship store at 333 Yonge Street in Toronto.

Recreational marijuana has been legally available in Ontario at the Ontario Cannabis Store online since October 17th.