TENSE NEGOTIATIONS BETWEEN JWR AND TRUDEAU TOOK PLACE BEFORE HE EJECTED HER AND PHILPOTT: REPORTS

It has come to light that Prime Minister Justin Trudeau tried for weeks to broker a compromise with Jody Wilson-Raybould over the SNC Lavalin controversy.

But published reports suggest the talks ultimately failed when it became clear he and other Liberal MPs could not reach an agreement with the former attorney general.

The reports reveal that over the course of the secret discussions, Wilson-Raybould had a list of at least five conditions that could help end the divisiveness within the Liberal caucus.

Among them, Wilson-Raybould wanted Trudeau to fire his principal secretary Gerald Butts, along with the Clerk of the Privy Council Michael Wernick and PMO Senior adviser Mathieu Bouchard.

Butts was never fired, but he did resign on February 18th. Wernick announced his retirement last month. Bouchard remains in the PMO.

Wilson-Raybould also apparently looked for assurances that her replacement as AG, David Lametti, would not order a deferred prosecution agreement for SNC Lavalin. And she is said to have wanted the PM to admit (publicly, or to caucus alone) that his office acted inappropriately in its attempts to convince her to consider granting SNC Lavalin a DPA. 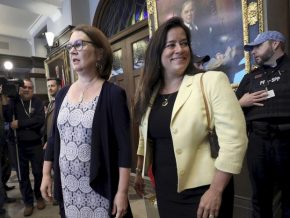 The scandal first broke in the Globe and Mail February 7th and continued until Trudeau announced Tuesday that Wilson-Raybould and supporter MP Jane Philpott were being ejected from caucus. Both women said on Wednesday, they are taking some time away for reflection and to speak to constituents in their ridings.