The Province’s legal challenge against the federal government’s carbon tax is expected to be heard at the Ontario Court of Appeal from Monday to Thursday. 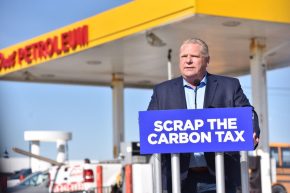 Ontario will argue that individual Province’s have the responsibility to regulate greenhouse gases and not the Federal Government.

In a statement released Sunday, Provincial Environment Minister Rod Phillips says the Ford Government has in the past weeks ”demonstrated the very real cost of the Federal government’s carbon tax on  people, institutions, and services of our province.” –

Phillips added that the province’s ”Made-in-Ontario Environment Plan will lower emissions and put us on a path to meet our province’s share of the federal government’s targets, serving as proof that a carbon tax isn’t the only way to fight climate change. It proves a carbon tax is unnecessary, which iswhy we will continue to use every tool at our disposal to challenge this tax on the people of Ontario.”

Both Saskatchewan and New Brunswick have joined Ontario’s challenge.