Arson has been ruled out in the devastating fire at Notre Dame Cathedral in Paris.

The fire burned down the spire and scorched much of the wooden roof of the iconic structure. 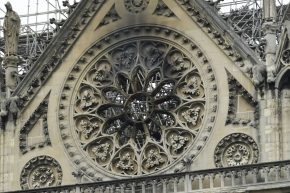 After nine hours, the fire was extinguished at the Notre Dame, with the two rectangular towers still intact.

Most of the artwork and religious relics inside the 850 year old cathedral, including one of the world’s biggest organs, were saved.

Already, donors have pledged hundreds of millions of dollars to rebuild the Notre Dame.

French President Emmanuel Macron is promising the cathedral will be rebuilt.

As for the cause of the fire, there is speculation it was linked to the current renovation project.

The British monarch says she was “deeply saddened” to see the cathedral ablaze, and expressed “sincere admiration to the emergency services who have risked their lives to try to save this important national monument.”