ARTHUR ASHE JR. TO BE HONOURED WITH A BOULEVARD IN HIS HOMETOWN OF RICHMOND WHERE HE ONCE FACED DISCRIMINATION

The late tennis champion Arthur Ashe Jr. will be honoured by the city of Richmond, Virginia and the Virginia Museum of History and Culture with an official dedication of Arthur Ashe Boulevard. 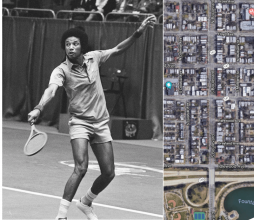 A ceremony is planned for June 22nd on the museum’s front lawn.

Ashe grew up in Richmond. He was the first black player selected to the U.S. Davis Cup team and the only black man ever to win the singles title at the U.S. Open, Wimbledon and the Australian Open.

In the 1950s, Ashe was denied access to the all-white tennis and recreational facilities at Richmond’s Byrd Park. Instead he honed his skills at Brook Field, the city’s park for black residents.

In the early 80s, he contracted HIV from a blood transfusion he received during heart bypass surgery, and died at the age of 49 in 1993, but not before founding the Arthur Ashe Foundation for the Defeat of AIDS and the Arthur Ashe Institute for Urban Health.