DIVORCED TORONTO DAD GOES TO COURT TO GET KIDS VACCINATED

A divorced Toronto father wants his kids to be vaccinated but he says their mother doesn’t, so he’s taking legal action to try and get them immunized against certain diseases.

Arnaud Presti insists his main concern is the well-being of his sons, now aged 8 and a month shy of 13. 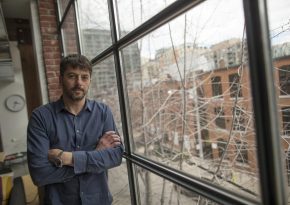 (Arnaud Presti said “I couldn’t imagine an arbitrator, who has the same power as a judge, going against the policy of the governments of Canada and Ontario, and going against the science.” RICK MADONIK / TORONTO STAR)

Presti began his vaccination battle when he and his ex-wife separated in January 2013. The dispute eventually landed before a family law arbitrator.

A ruling in April of last year determined that choosing not to vaccinate is not illegal, negligent nor immoral, but a personal choice.

Presti says his request for an appeal will be heard May 30th. He says feels a positive decision can’t come soon enough.

Presti’s ex-wife has not responded to emails and a phone message from the Toronto Star requesting comment.

His legal attempt to get his sons vaccinated comes as the United States battles its largest outbreak of measles since 1994.

In the Greater Toronto Area, almost 30 per cent of all schoolchildren at age 7 are not fully vaccinated.

A March report by Toronto’s Medical Officer of Health, Dr. Eileen de Villa, estimates that 20 per cent of parents in Canada are “vaccine hesitant and are unsure about the safety and effectiveness of vaccines.”