After missing most of last season with a neck injury, veteran Toronto Argonaut Quarterback Ricky Ray is retiring. 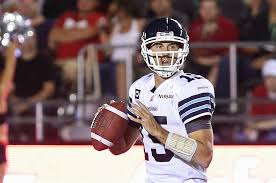 Ray spent 17 seasons in pro football, 16 of those in the CFL over a career that saw him win a record four Grey Cups as a starting QB.

He also leaves the CFL as one of its most prolific passers.

The 39-year old is second in career passing percentage at 68.16%, fourth in passing yards with almost 61,000, one of only four player to reach that plateau, and he is the all-time passing leader with Edmonton and Toronto.

Ray says he has no immediate plans although he may try his hand at coaching.

He and him family will be honoured at BMO Field, June 22nd, at the Argo’s home opener against Hamilton.