The TTC has launched a campaign to try to educate people about the consequences of fare evasion on both the evaders and the transit service. 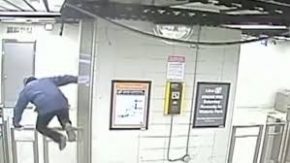 The campaign was launched in response to a report in February from the city’s auditor general.  It found that fare evasion cost the TTC more than $60 million last year which in turn impacted the agency’s ability to maintain the system and limit fare increases.

The Transit Commission has released a video showing a a man climbing over a gate in a subway station with text at the end reading “Smile, you’re on fare evader camera.”

The message then changes to say that fare evaders can be fined up to $425.