50 YEARS SINCE JOHN AND YOKO'S BED IN FOR PEACE

Believe it or not it’s been 50-years since John Lennon and Yoko Ono launched their bed-in for peace at Montreal’s Queen Elizabeth Hotel. 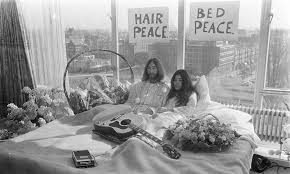 In celebration, Montreal’s Phi Foundation has opened a 50th anniversary exhibition called “Growing Freedom, Arising, and the art of John and Yoko,” bringing historical, political and artistic notes together in one place.

Part of the exhibition serves as a documentary of the bed-in for peace that began on May 26th 1969.

Ono, now 86, married Lennon in 1969 and the couple were on their honeymoon when they staged the event.

After the show closes in Montreal in September, it will go to Amsterdam for showing next year.