Following sustained pressure from local leaders and the public, the Ford government has backed down on retroactive funding cuts to municipalities. 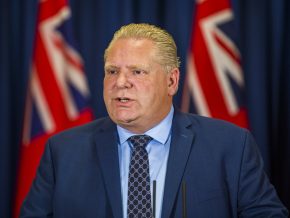 Making the announcement on Monday morning, Premier Doug Ford said that after speaking to a number of Mayors who have expressed concern in recent weeks, they have come to the conclusion that they are going to work together and maintain the funding for services such as childcare, public health and ambulance services throughout this year.

However, as it stands, the cuts will come into effect next year with the province expecting municipalities to use the rest of the year to find efficiencies to make up for the shortfall.

The Tories had announced the cuts as part of wider cost cutting measures in an effort to tackle a $11.7-billion deficit.

The cuts combined with the cancellation of an increase to municipalities’ share of the gas tax mean that local governments would be out well over half a billion dollars annually.

Mayor John Tory, who had been a very vocal opponent of the cuts and helped spearhead a campaign for their reversal, has welcomed the news saying that while he supports the provincials government’s intention to reduce it’s deficit, it must be done in a prudent collaborative manner that does not effect vital public services.