A Toronto Police spokesperson calls it “impressive” – the fact police did not make a single arrest after thousands of jubilant fans flooded the city’s downtown streets Saturday night to celebrate the Raptors becoming the NBA’s Eastern Conference champions. 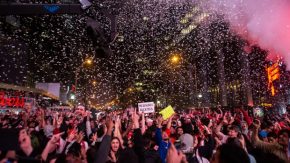 Elated fans ran into intersections, danced on top of TTC buses and streetcars, even on police cruisers, but Toronto Police Spokesperson Katrina Arrogante says they stayed out of trouble.

The Raptors made history when they knocked off the Milwaukee Bucks, and now they move on to face the Western Conference champion Golden State Warriors, with Game 1 Thursday night in Toronto at Scotiabank Arena.

Arrogante says police will be out in force again, and she hopes fans continue to have fun safely.