We are learning that Elizabeth May offered to give up her job as leader of the federal Green Party if Jody Wilson-Raybould had wanted to take it on.

May says she made the offer to the former justice minister soon after Wilson-Raybould and former fellow cabinet minister Jane Philpott were ousted from the federal Liberal caucus last month by Prime Minister Justin Trudeau amid the SNC-Lavalin controversy.

Both were considering joining the Greens, but each announced in their home ridings yesterday they will run in the October election as independents. 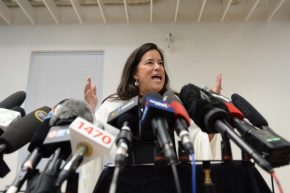 “I know it will not be easy to run a campaign as an independent. There will be challenges,” said Wilson-Raybould to a news conference in her Vancouver-Granville riding.

“I hope across the country other people will say none of the parties is exactly me, and I can’t fit myself into a box,” Philpott explained as she announced her intentions to run as an independent in the GTA riding of Markham-Stoufville.

There are five other independents in the House of Commons, plus two Greens and single representatives of the People’s Party of Canada and the Cooperative Commonwealth Federation.