The British Film Institute in London has uncovered film of Queen Victoria which shows her being driven around in an open air car, wearing sun glasses and actually smiling. 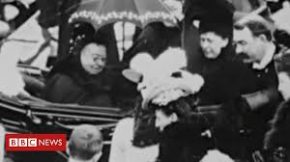 BFI Curator Bryony Dickson says she nearly fell off her chair when she saw the footage, which she says, because of the smile, tends to humanize Victoria for the first time.  All of her portraits and posed photos show a non-smiling, almost scowling monarch.

The footage, which was shot in the late 1890’s is being released to coincide with the continuing celebrations of Queen Victoria’s 200th birthday.